History of the Library

The Delaware Township Library Association was formed in 1957. Area civic groups banded together with the common desire of creating a community library. In 1958, Delaware Township Free Public Library opened in an old courtroom by the police station; it boasted a collection of 2,000 books which were supplied by the Camden County Library and was open two evenings per week.

As part of a referendum was held in 1960, citizens voted 2-1 to establish a town library independent of the county facility. By 1961, the library had outgrown the courtroom and was relocated to a 3600 square foot air conditioned storefront in the Ellisburg Shopping Center. The library was now open six days per week, circulating an astonishing 1,000 books per day; collection size soared to 20,000 volumes. But there was another attraction besides the books: in 1963, the library installed the only Vico-Matic coin operated photocopier for public use in the county. Each copy cost $.25 ($1.95 in 2014).

It was time for a larger facility. The library board voted unanimously in 1964 to purchase a 3.3 acre tract of land along Kings Highway. Samuel De Cou sold them this property for $15,000, which was a fraction of its assessed value. Malcolm Wells was selected as the architect for the new structure. He stated in the building plans that he would “use rough timbers of Douglas fir to create a warm and inviting place where people will want to read.” 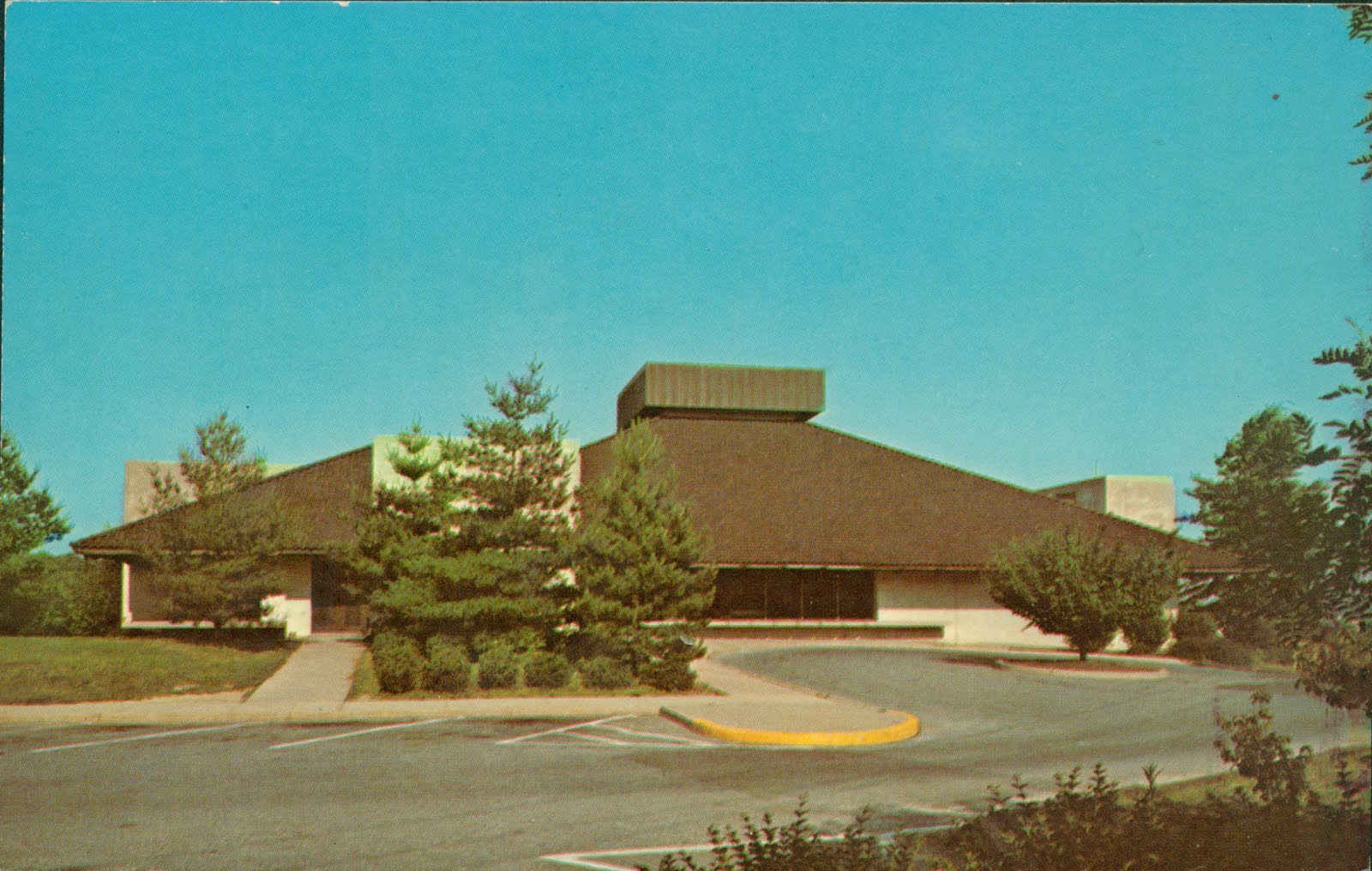 In 1966, the new library building, eight times the size of the previous one, was finally completed. The introductory open house drew a crowd of 3,000. The $400,000 structure boasted space for 150,000 books, 350 periodicals, microfilm readers, a music listening area, art display areas, and a meeting room for local organizations in addition to a 3,430 square foot mezzanine.

The library’s longest-running program, Coffee & Conversation, had it first meeting in 1972. This program met the first and third Friday of each month from September through June for 38 years, and provided attendees with a wide variety of program topics.

For the convenience of residents, a book drop was installed at the Marlkress post office in 1976. This was also the year of the 10th birthday party celebration, which included not only refreshments, tours, and fine forgiveness, but also poster and essay contests for kids in grades 1-8. It was noted in this year that over 55% of residents were using the library (double the national average)., and that the collection contained 110,000 volumes, 500 periodicals, a variety of music cassettes, and an extensive microfilm library. Programs offered included a preschool story hour, free film fare, coffee and conversation, kids’ summer reading program, and a short story discussion group.

February of 1989 brought compact discs to the Cherry Hill Library. In case patrons were unsure about this new technology, the library had a portable player available for onsite use. In May of that year, disabled patrons were offered talking 8 RPM flexible disks, which held 4 hours of speech and played on talking book machines. The machine needed to play these disks was on loan from the Library for the Blind and Handicapped in Trenton, made available for those awaiting the arrival of their own machine. Starting in June, the library began to circulate framed art. Patrons could borrow prints by well-loved artists like Monet, Wyeth, and Cassatt, and return them two months later.

The Friends of the Library group organized in 1991. Proceeds from their first book sale raised $600; current sales raise over twenty times that amount! The library’s 25th anniversary celebration occurred in 1992. The day-long celebration, financed with support from the Friends and local businesses, offered entertainment with musicians, jugglers, and magicians, and a meet-and-greet with local authors.

For 29 years, the library used a machine called a Regiscope to check out books to patrons. This machine photographed each transaction, and Cherry Hill was one of only three libraries on the East Coast still using it when computerized checkout finally arrived in 1993.

In 1995, Cherry Hill Public Library became Camden County’s first municipality and one of only five libraries in NJ to offer Internet access. The township now had its own home page where residents could access a wealth of information about township history, local officials, and community events.

With growing demands from its 70,000 residents, and after two years of community surveys and planning, an official groundbreaking was held for a new 20 million dollar facility in 2002. The new building would be more than twice as large as the old one, with nearly 100 computers, inviting seating areas, an art gallery, a café, meeting rooms, and an entire floor for children.

In 2004, prior to demolition, a closing ceremony was held for the old library building. In December of that year, the doors to the new facility were opened at last. National Library Week in April of 2005 marked the official grand opening, attracting a crowd of 10,000, and offering numerous activities for patrons of all ages.Image result for sunday morning sculpture J. Seward Johnson’s sculpture “Sunday Morning” had been on loan to the Cherry Hill Public Library, but many wanted it to stay permanently. The Friends of the Library launched a grassroots campaign in 2007 to purchase the sculpture, kicking off the fundraiser with a $10,000 donation. Individual donations, a special book sale, a community flea market, and a holiday house tour helped the group to meet the $65,000 goal in less than a year.

Since its inception, the Cherry Hill Public library still proudly serves its community today. With a knowledgeable, caring staff and a myriad of resources to offer its diverse population, the library is poised to embrace the future while continuing to honor and preserve the past. From 3D printing to museum passes, computer and technology classes to book clubs, and the latest bestselling books and eBooks to a quiet place to read, the Cherry Hill Public Library is the heart of the town.

Stay up to date on everything happening at the Cherry Hill Public Library!

Get to Know Us

Didn’t find what you are looking for?